Colombia’s peace deal could hang on the US election 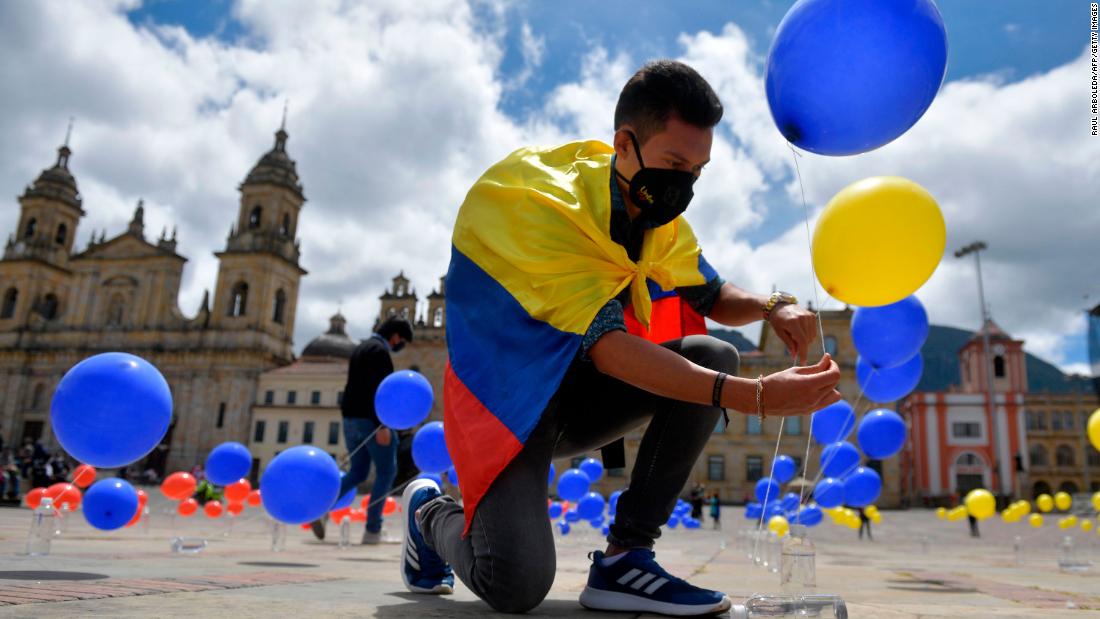 At the center of that struggle is the 2016 peace agreement, which ended a 52-year armed conflict with the Revolutionary Armed Forces of Colombia (FARC). The peace process has foundered in the two years since current President Ivan Duque — who campaigned on a platform to reform the deal — came to power. Violence against social leaders has exploded in rural areas where peace was supposed to bring prosperity, 146 former FARC guerrillas have been murdered, and coca cultivation, considered a yardstick of illegal activity in the country, has boomed. Colombian politics might not seem like the most obvious electoral issue for US voters, but it could play a vital role in deciding who is the next president. Florida, a key battleground state which President Donald Trump won by just 112,911 votes in 2016, is the reason why. There are around 250,000 Colombian-American eligible voters in the state, and Trump is battling Democratic candidate Joe Biden for their support.

Trump has shown little interest in Latin America beyond a laser focus on using transactional foreign policy to reduce migration and support for the Venezuelan opposition, but he recently took the time to criticize the Colombian peace deal as a surrender to “narco terrorists” and praise former president Alvaro Uribe, a key opponent of the peace deal who has many supporters in Florida.

Meanwhile, Biden has made his own play for Colombian-American voters, including penning op-eds in the South Florida Sun Sentinel and El Tiempo newspapers underlining his record of support for Colombia and the peace deal. “I have said many times that Colombia is the keystone of U.S. policy in Latin America and the Caribbean,” wrote Biden. The former Vice President also evoked his key role in implementing Plan Colombia, a US aid program that funneled $10 billion into the country to counter the FARC insurgency and drug trafficking from 2000-2016.

While Biden and Trump duke it out for a quarter of a million Floridian votes, in Colombia a fragile peace hangs in the balance.

Colombia’s Duque administration has been working to dismantle the peace deal since taking office in August 2018. The President has dragged his feet in distributing land to smallholders in rural areas under agrarian reforms set out by the peace deal. His attempts to change certain articles, including those protecting former guerrillas from extradition or from having to pay reparations to victims, have been blamed for driving some members of the FARC to take up arms once more.

Though he says changing the deal is necessary to make it fairer for the victims of the FARC, he has faced major criticisms over his handling of the process and has failed to get a handle on a worsening security situation and mounting concern over human rights abuses. 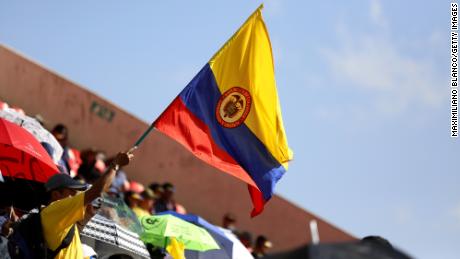 Though Duque has not made any statement about the US election, there is little doubt that his government appreciates Trump’s disregard for the peace deal, as it would prefer to be allowed to continue weakening the agreement without pressure from Washington. Analysts say a Democratic administration is more likely to oppose the changes.

Certain Colombian politicians who also oppose the peace deal have even been accused of promoting Trump’s reelection campaign, including Colombian Congressman Juan David Velez, of Duque’s Democratic Center party, who acts as sort of ambassador for Colombians in the United States.

Velez, a vocal Trump supporter, recently tweeted in English, “WE WILL MAKE COLOMBIA GREAT AGAIN” along with a retweet of Trump’s claim that Biden is a “PUPPET of CASTRO-CHAVISTAS,” a common phrase among Latin American politicians invoking a fear of left-wing politicians Fidel Castro and Hugo Chavez. Velez also retweets Trump campaign videos and Florida’s Republican governor Ron de Santis. 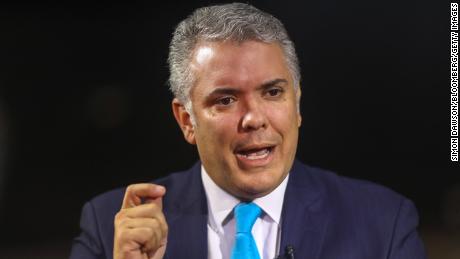 Another right-wing Colombian senator, María Fernanda Cabal, has even produced pro-Trump social media videos and written anti-Biden op-eds designed to influence the Latino vote in Florida. She told CNN that a second Trump term would bring peace and prosperity to Colombia, and described Biden as a “socialist” — echoing a common and inaccurate attack line among Trump and his allies in Florida. Cabal also criticized the peace deal as “the biggest money laundering operation in the history of Colombia,” as she believes it allowed the FARC to invest the proceeds from its criminal activities in legitimate businesses.

These efforts to spread anti-Biden sentiment break longstanding conventions on neutrality in national elections and have sparked concern about long-term damage to US-Colombia relations. Democratic congressmen Rep. Gregory Meeks and Rep. Ruben Gallego criticized Velez and Cabal for taking sides in the election in a CNN op-ed Saturday. “Show us the respect of staying out of our elections,” wrote the pair, criticizing their statements as a “form of election interference.”

The US Ambassador to Colombia, Philip S. Goldberg, also called for Colombian politicians to keep out of the election. “For many years successful relations between the US and Colombia have been based on bipartisan support,” wrote Goldberg, who was appointed by Trump in August 2019, on Monday. “I urge all Colombian politicians to avoid getting involved in the US elections.”

Cabal told CNN the allegations of electoral interference are “risible.” 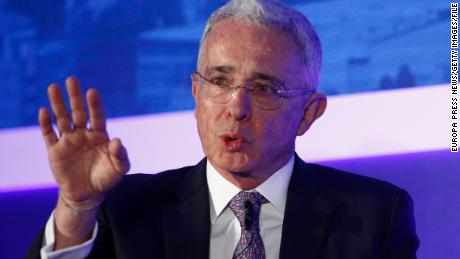 Meanwhile, Colombia’s opposition figures are fearful of the potential consequences for the peace deal if Trump is reelected.

Senator Ivan Cepeda of the leftist Polo Democratico Alternativo party, a longtime supporter of the deal, fears a second Trump term could embolden the right-wing majority in the Colombian Congress to renounce the agreement. “I’m not going to take a position in favour of any candidate, but it’s sad to see something as serious as the peace deal used as a campaign tool for a handful of votes in South Florida,” said Cepeda.

The gravity of the situation is underlined by worsening violence due to continued attacks on the peace deal. In the four years since the deal was signed, 971 social leaders have been killed, according to the Institute of Development and Peace Studies. Despite mounting criticism over deteriorating human rights, US Secretary of State Mike Pompeo didn’t mention the killings during a September 19 visit to Bogota, instead lauding Duque’s work in combating drug trafficking and boosting US private sector investment in rural Colombia. 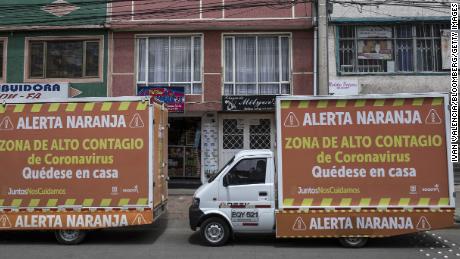 Experts believe a Biden administration would put more pressure on Duque to protect rights defenders. “Biden would be more supportive of the peace process and critical of the social leaders’ killings in Colombia,” said Adam Isaacson, director for defense oversight at the Washington Office on Latin America.

Biden spoke about his hopes for the peace deal during a visit to Bogota in 2018. “To exit the agreement and go back to the battlefield is not the right answer,” he said. “Colombians have suffered a lot and for too long because of lack of peace.”

Biden will likely continue to take a keen interest in the country if he is elected. But some worry the outspoken support that the Democratic Center Party has shown for Trump could damage future relations with a Biden presidency. 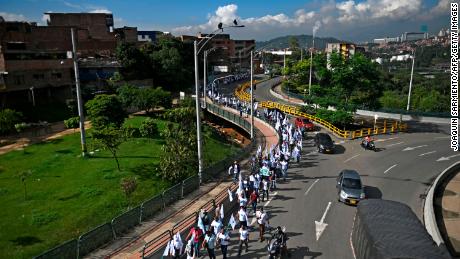 Gabriel Silva Lujan, former Colombian Ambassador to Washington and defense minister under Uribe, worries that Colombia’s ruling party’s decision to cozy up to the Republicans might prove “immensely costly” for Colombia if Biden wins. Not only will Duque have to answer for the deteriorating human rights situation, but he may hope to call on US support for the brewing economic crisis, wrote Lujan in an op-ed for Colombian newspaper El Tiempo on October 19 — in that case, cordial relations with whomever occupies the White House would help make his case.

“(Duque’s) government will not be able to expect the Democrats to be magnanimous and forgive its significant, indiscrete and inappropriate involvement in the US elections,” Lujan warned.